I want to buy a lease for a holiday home in the Cook Islands?
It is possible for a non-Cook Islander to lease a property but not for more than 5 years. Only Cook Islanders or business owners can lease property in the Cooks for over 5 years and special conditions apply such as LAC approval.

Is there any freehold land I can buy?
There is no freehold land in the Cook Islands and a 60 year lease is the longest available and cannot have the right to renew. When the
lease time runs down it is possible to approach the land owner and top the lease back up to 60 years again but this is up to the landowners if they wish.

Can I on sell my lease?
Yes you can and once a sale has been signed up the landowners then have the right to buy the property back at the agreed price and have 30 days to do so.
The property must be advertised to let the landowners know it has a sale on it and they have the first right of refusal.

If I did sell my lease would it be worth less than what I paid for it?
Land seems to hold its value here and we know of a lot of sales that although the time of lease was less than when purchased, the sale price was more than the original price paid. In saying this it is not encouraged to buy property to speculate on.

What rates and taxes apply to property leases?
There are no water or rubbish rates or Government property rates. There is a yearly rental payable to the landowners depending on the type of lease.
This is reviewable from five to ten years. On a domestic lease for quarter acre the rental is about $500 on average. This rental cannot be raised to a silly level and there is a body that you can complain to and have mediate for you if you aren’t happy with the increase at the review time.
It’s usually not more than 10% per five years.

What is the local schooling like?
The schooling here is compatible with NZ and Aussie.
We have state run and private schools. With a very low crime rate and heaps of fun things for the kids to do it makes for a healthy environment for schooling. Children are taught to respect their parents, teachers and elders as family is a very important part of life in the Cook Islands. Check out – www.education.gov.ck

What is VAT Tax? (Value added Tax)
VAT is the similar to GST tax. In the Cook Islands it is 15% which is included in any advertised pricing.
Any VAT registered company adds it to its prices and that company claims it back when they purchase goods.

What currency do we use in the Cook Islands?
New Zealand currency is used as well as a few local coins such as the $5 and the triangle $2.
We also have two types of $3 bill.

Rarotonga’s two weekly newspapers, the Herald and the Independent are owned by Elijah Communications, which also operates Cook Islands Television and Radio Cook Islands. Bring your cell phone with you as you can roam or buy a sim card for $25 and operate on the local network on a pre-paid deal. There are plenty of internet cafes to access the net for emailing etc.

Facts about our Islands
The Southern Group, comprising Rarotonga (the main island), Aitutaki, Atiu, Mangaia, Manuae, Mauke, Mitiaro, Palmerston and Takutea, are mostly of high volcanic formation (up to 652 metres on Rarotonga) with fertile soils and lush tropical vegetation. The exceptions are the small atolls of Manuae and Palmerston are small atolls, while Takutea, is a sandy key. The Southern Group possesses about 90 percent of the total land area of the Cook Islands. Rarotonga is the largest island (6,719 hectares) and Takutea, the smallest (122 hectares).The Northern Group comprises Manihiki, Nassau, Penrhyn, Pukapuka, Rakahanga and Suwarrow. All except Nassau which is a sandy key, are low-lying coral atolls with sparse vegetation (coconut and pandanus trees etc) and large lagoons. Penrhyn is the largest island (984 hectares) and Suwarrow, the smallest (40 hectares).

The closest outer island to Rarotonga is Mangaia (204kms distant) while the farthest is Penrhyn (1,365kms away). The two most widely-separated islands of the country are Pukapuka, in the Northern Group, and Mangaia in the Southern Group (1,470kms apart).
Rarotonga is about 3,010 kms northeast of Auckland, 1,140 kms southwest of Tahiti, 2,300kms east of Fiji and 4,730 kms south of Hawaii. 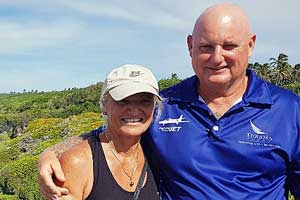