We are looking for an investor… 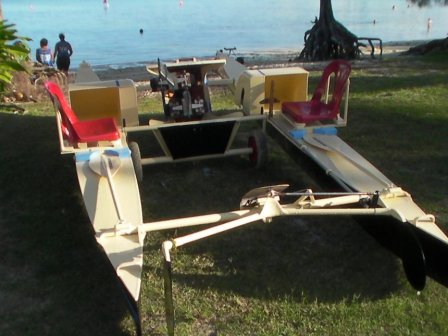 It has many advantages over existing ones. They are:

On top of this it is silent and all the people who have tried it are impressed with it’s effortless user-friendly aspects with no skill requirement.

Ken has spent the last eight years developing the system and has made 3 models all of which perform up to the previous claims.

He has filed a NZ patent through A J Park of Wellington who are urging the extension of this to a world cover.

Production on Rarotonga would be a practical way to establish an industry that could soon go global.

With a injection of capital Ken could soon establish production of the drive system in a small workshop locally.

The best way to test the first production models would be to hire them on the lagoon where they would provide a solid cash flow.

Suggested agenda:
Investor will take out a 50% (NZ$1,000,000) interest in the business by providing the capital to progress from this point and shoulder the responsibility of marketing and accounts.

Ken, although of retirement age, would be keen to continue perfecting the existing design and leading the development of scaled up commercial vessels with the advantages of the K S F D S (Kingsbury Swinging Foil Drive System).

The Treddlecat story; sixty years in the making
Ken Kingsbury taxed the patience of parents and teachers alike with his questions from an early age.

“How does that sailboat go that way when the wind is going the other?”-was one that marked a critical stage in the development of his fascination with boats.

Although he ended up flying helicopters as a means of financing his marriage and family, getting afloat was his favorite recreation.

Right from the start the limitations of the various craft he took command of irked him. It always seemed to Ken that most of these limitations were inadvertently built in by the designers and manufacturers. In his mind he automatically worked out ways of pushing back these limitations. He soon realized there was always a way of doing this by modification of the original design.

In this way he learnt a wide range of first principles of mechanics and dynamics and could apply them to almost anything that caught his interest.

Much later in life Ken realized that evolution has mindlessly found the most efficient way of converting energy to forward motion through aeons of trial and error. He was amazed that intelligent men seemed to consistently ignore the conclusions of Natures millions of years of research in the pursuit of survival.

Half a century of modifying and redesigning boats and windsurfers as a hobby eventually led him to tackle the problem of propelling boats with human muscle.

The catalyst for this was being asked to make a “pedallo” for hire at a resort on a coral lagoon.

While examining these ridiculously inefficient man-powered boats a number of ideas of improvement jumped into his mind.

Memories of being towed around in a boat by a large fish on the end of a line made him realize the superiority of the fish’s propulsion system.

His preparation started with the establishing two first principles.

1.The higher the proportion of available energy being used to disturb the water the less is left to move the boat forward.

2.Water being a liquid, the less time it is given to move in response to the driving force applied to it the less the energy wastage.

After studying fish in motion he arrived at this conclusion; the fish moves its fins in such a way as to make them track forward through the water taking the fish’s body with them.

Although the first trial of the first version of KSFDS exposed a number of mechanical miscalculations it showed potential.

Over the next year the system was extensively modified until it appeared in a small catamaran called the “Cruzicat”. Using the leg muscles of two persons sitting in the hulls this vessel could sustain 8 kph with the energy needed for a brisk walk.

Hiring it out on Muri Lagoon soon uncovered its weaknesses. After a few years of repairing and modifying the Cruzicat, during which time a second improved design was introduced. Because both had mechanical linkages from the pedals to the swinging foils the vessel was doomed to be repeatedly damaged due to the foils being unable to swing back on encountering obstructions.

The radical change in design that produced the Treddlecat seemed in retrospect an obvious solution. In solving many problems it resulted in improved efficiency, simpler construction and dramatically improved resistance to damage.

Ken’s predictions were uncharacteristically pessimistic in picking 5 knots for the top speed of the Treddlecat. The Mk I prototype reached 5.4 and the Mk III, 5.7. with Kens arthritic knees doing half of the work.

He is currently working on a Mk IV which is intended to demonstrate the efficiency of the system by beating the local racing canoes.
Although quantitative analyses has yet to prove it the KSFDS seems likely to be the most efficient man-made marine propulsion system.
From your point of view as the user of the Treddlecat for leisure the most important feature is its ease and comfort and the fact that you can virtually do no wrong.

More about the inventor
Ken is now a pensioner. Although he does not make many concessions to his long departed youth he has to accept a few limitations. He still makes an effort to rig and sail his own design windsurfer when weather is perfect for it but his main concern now is future financial security.
A full time occupation inventing leading edge marine devices would suit him (and his patient wife of 46 yrs, Elizabeth). This should not be such an unrealistic ambition as he has a string of them lined up in his head just waiting for the opportunity to be made practicalities.
Any potential investor should be encouraged to visit Raro to try for themselves the leisure version of this breakthrough invention.

The KSFDS (Kingsbury Swinging Foil Drive System) can be powered through a single ram hydraulic link from a simple linear motor (electric) or a simple single piston steam engine with no requirement for any rotating parts. 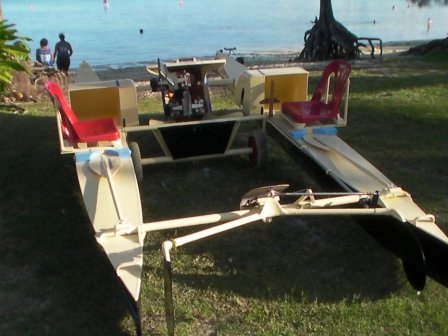 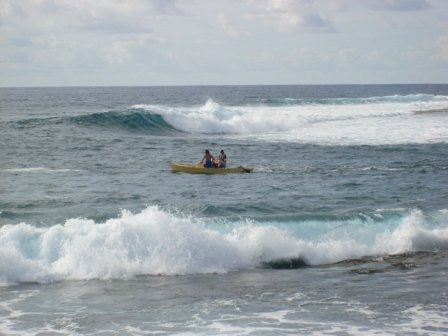 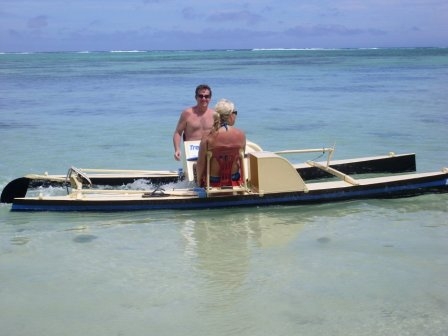 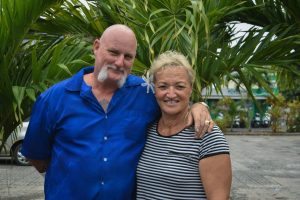